A Conversation with W. Ramsay McGhee, Grand Master Mason of the Grand Lodge of Scotland.

With the extended lock-down and the various challenges presented by a number of irregular and clandestine persons who are styling themselves as Freemasons in Lebanon, the District Grand Lodge of Lebanon, under the jurisdiction of the Grand Lodge of Antient Free and Accepted Masons of Scotland, presents its series, ‘Conversation with a Mason.’ All Freemasons in good standing are welcome to attend.

A Brief History of our GMM: 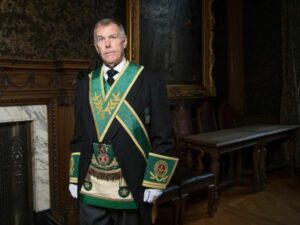 The Grand Master Mason, Brother William Ramsay McGhee, was initiated into Lodge St Barchan No 156 in the Province of Renfrewshire East on the 18th February 1969.

In 1973 he, along with his family moved north and he subsequently became an Affiliate Member of Lodge Seaforth No 854 in the Province of Ross & Cromarty and became Master of the Lodge in 1991. He is also a Reponing Member and Past Master of Lodge Allan Wilson No 851.

He has been Proxy District Grand Master of East Africa since 2007 prior to which he was Proxy Master of Lodge St Andrew 1437 in Singapore.

In Grand Lodge he has served as a Grand Steward, a member of Grand Committee and in 2003 he was installed as Grand Inner Guard after which he served as Assistant Grand Director of Ceremonies for a year before becoming Grand Director of Ceremonies in 2005, an Office he held until 2014 when he was appointed Depute Grand Master. He served in that Office for three years and was installed as Grand Master Mason on 29th November 2018.

He is actively involved in a number of other Orders in the Highland area.
Away from Freemasonry, he joined the Police Service in 1973. He served in Dingwall, Gairloch, Muir of Ord and Fortrose before being promoted to the staff of the Scottish Police College at Tulliallan. After 3 years on the staff he moved to Mallaig as Section Sergeant covering what was one of the biggest sections in the UK including the Small Isles of Rhum, Muck, Eigg and Canna.
He was seconded to Lancashire Constabulary to work on a new computerised crime recording system before returning to Northern Constabulary HQ in Inverness where he spent four years as Inspector and then Chief Inspector in charge of the Information Technology Department, responsible for Communications, Computer Technology and the Force Control Room. In 1995 he was promoted to Superintendent and seconded to the Home Office in London for three years. On his return to the Force he worked in HQ for a short time before going back operational as Area Commander for Inverness. Three years later, he was promoted to Chief Superintendent and assumed responsibility for all Operational Policing in the Highlands and Islands.

On retiring from the Force he set up his own business working in project management and in the Licensed Trade where he specialised in training and was the Area Manager for the Scottish Licence Trade Association. He was Convenor of the Highland Licensing Forum.

Outwith Masonry, and apart from running his own business, he is actively involved in Rotary and is a Past President of Riverside Rotary Club in Inverness, he is Vestry Secretary and Organist in St Andrew’s Church in Fortrose and is a member of the crew of the Seagull Trust boat based in the Caledonian Canal. He is Chairman of the Board of Trustees for a charity dealing with drug and alcohol addiction known as “For the Right Reasons”. In May 2014 he was honoured by being appointed as one of the Deputy Lord Lieutenants for Ross, Cromarty, Skye and Lochalsh.
Ramsay is married to Ann and they have three children – Fiona who recently retired from the Army where she was a Major in the QARANC, Iain who runs his own construction business in Devon and Douglas who teaches in Australia. They have 7 grand-children.